I am a maker of poems, tunes and songs. I am also a performer of English poetry – from the present day back to its earliest written beginnings in Anglo-Saxon times. I deliver English poetry so far as possible in its original tomes, dialects and rhythms. Too much nonsense is talked and taught about English poetry and its rhythms.

My work acknowledges and is based upon the very close kinship of poetry and music.

I look for what I call the ‘song likeness and dancing ness’ of English poetry. I happily find this in the work of such makers as: Graves, Hopkins and Barnes; Herrick, Marvel and Herbert; Donne, Shakespeare, Wyatt and Skelton; Chaucer and the ‘Gawain’ poet; and all the anonymous medieval makers back to Caedmon.

I perform around the country at Arts and Literature Festivals such as those at Buxton, Brighton, Horsham, Swindon, Hexham Abbey and Whitby; in schools and colleges and universities, such as Manchester and Leeds; and I have performed at the International Medieval Congress.

In the 1980’s I was happily and appropriately employed to take care of a five acre ‘farm’ in Cheshire. I lived in outbuildings and did not use electricity. My hearth and only heating was a wood fire outside the barn. On this small-holding I lived an increasingly self-sufficient life, keeping fowl, goats, sheep, a horse and bees. I made hay with a scythe and pikel and rake. I call myself a husbandman.

I was writing poetry and tunes and was working my way back to the roots of English poetry. I wanted to tease out its essential original rhythms, its footings, to find out how it was done.

Through the Extramural Department of Manchester University – to which I would cycle the twenty miles – and its Centre for Anglo – Saxon Studies, I reached back to the Old English. In this I received especial help from Dr. Felicity Curry, Dr. David Hill, Dr. Donald Scragg, Dr. John Anderson and Dr. Alex Rumble.

In the 1980’s I began to perform my own pieces locally, sometimes under the name of ‘Doctor Acorn’. These shows are now usually presented under the title of

In the 1990’s I began performance over the whole span of English poetry. In this work I formed a fruitful association with an ‘early music’ group called Partita which was led by Roger Child. The group contained such members as Tony and Margaret Walker, Sasha Johnson – Manning, Holly Marland, and Jill Lingard. At this stage the show was usually called

A Tongue to Sing

The Heritage and Traditions, the Movement and Rhythm of English Poetry over a Thousand Years

This show has also been developed into

I also present a show called

‘1300 years of English Poetry stripped down to its rhythmic essentials.’
‘This performance unlocks the mystery as to ‘the rhythm of Beowulf’, a problem which has been much discussed and much confused for many years.’

I also present a show called

‘A performance from the 21st century back to the written beginnings of English poetry.’

To book a performance, lecture or after dinner speech, please contact me. 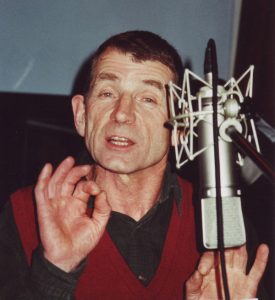